As a candidate for North Saanich Council, it’s been impossible not to notice how the housing affordability topic dominates public and private discussions. I would like to offer some thoughts about how we got here.

The Global economic collapse of 2006-10 was triggered by intense housing speculation and debt over-reach.  Many Americans lost their homes and the money they’d invested in them. Canadians largely escaped that pain, but we didn’t take the lesson seriously.

Prolonged, extremely low interest rates in Canada, coupled with our human fear of missing out have pushed housing prices higher and higher. People have been encouraged to go into greater debt than ever before, outbidding ourselves to buy it, confident that real estate always goes up.

Since the beginning of the year, the Bank of Canada rate has risen from 0.25% to 3.25 and housing prices are falling accordingly.  Those who bought at the height of the market in the middle of the pandemic are the most hurt. However, anyone who needs to renew their mortgages at higher rates, will also suffer.

Many Canadians have been pleased to watch their houses gain in value and have felt enriched because of it.

However, everything has consequences. Seniors and others on low or fixed incomes, as well as young people without the benefit of wealthy parents to draw on, have been the most impacted. What does it say about our values, when we celebrate an economic gain that damages our seniors and youth?

Municipal governments cannot affect national economic policy, but they are affected by its consequences and they do what they can to mitigate them. North Saanich mayors have served on the Greater Victoria Homeless Coalition, established in 2008.  Since 2005 North Saanich District has contributed annually to the Capital Region Housing Trust Fund.  When this fund was established, the region’s mayors and councils recognized that a joint effort among municipal, provincial and federal governments was needed to address the growing problems with housing. That continues to be true and led to the Regional Housing First Program that led to contributions by all CRD municipalities.

Currently, there are 109 subsidized affordable housing units in North Saanich. Yesterday, I had the pleasure of visiting the 40 seniors units at Winward Kiwanis and talking to the residents there. North Saanich also has 24 BC Housing low income family rentals at Heron Cove, 5 rental assistance families in private market housing, 7 rental assistance seniors in private market housing and 23 units for special needs supported by BC Housing.  The 10 Habitat for Humanity units bring the total to 109.

For a municipality the size of North Saanich, this is a respectable level of affordable housing.

Adding more market housing and densifying existing lots does not make housing more affordable. Instead, it encourages further speculation from investors, both individual and corporate. It also destroys more natural habitat and worsens the effects of climate change.

For these reasons, I do not support it, nor see it, as a way of making housing affordable.

In North Saanich, we are faced with the usual, but inappropriate, dilemma: housing and development vs. rural values. Why is it inappropriate?

The CRD has created the Regional Growth Strategy in which the Urban Containment Boundary has emerged as a key feature. Evidently, urbanization requires containment – the RGS policy states that a maximum of five per cent of regional growth will accrue to areas like North Saanich that are outside the UCB. There is no dilemma, our direction is clear. What does that mean for North Saanich and our candidates?

It means that they should support the RGS, and not apologize for doing so. In fact, they really don’t have a choice. It is a wisely crafted document because it recognizes that there is no natural harmony between rural/agricultural landscapes and those that are urbanized. Rural values exist mostly for what they are but also for what they are not – dense, busy, noisy, crowded and stressful but necessary for efficient housing, transport and commerce. The RGS recognizes that they cannot coexist – hence the 5/95 per cent growth prioritization. Why is this planning guidance problematic?

It isn’t but can be if misrepresented. In our area, and indeed much of the developed world, housing availability is difficult and glib, knee-jerk solutions (build more) are abundant. There are many examples of why that approach simply does not work – including Canora Mews and Eaglehurst. So, what is North Saanich’s role in the housing crisis?

At best, it is very limited, guided by the five per cent growth ceiling clearly defined in the RGS. Today, existing zoning provides for considerable population growth without densification or altering the UCB. So, why are we being asked to provide housing solutions that contradict the RGS, when other jurisdictions, who officially have that obligation, have apparently failed?

We are doing our share, or more, within the CRD, we just have to be clear about what it is. Specifically, our obligation in North Saanich is to provide many non-urban amenities and values that other municipalities cannot, for the whole CRD.

Make sure that you select candidates for mayor and council that truly understand the Regional Growth Strategy and our role within it.

As usual, housing issues are dragged into the election discussion.  For our municipality, other issues should have a higher priority.   Not to suggest that housing is a not a worthy topic, now more than ever, but as designated in the Regional Growth Strategy, North Saanich's priorities are aligned more with rural and agricultural attributes.

Notwithstanding this clear imperative, we are drawn into the "housing debate" through various arguments, many of them poorly grounded.  Although many residents, and some candidates, offer glib and knee-jerk "solutions" to the housing challenges, almost none offer practical solutions.  Although many claim to support "affordable housing", almost no one explains how it can be achieved.

There are many articles explaining why the "build more" approach will not make housing affordable.  This is especially true in North Saanich, where land prices are very high, probably among the highest in the CRD.  Affordable housing implies that all components of the dwelling be obtained at a lower cost, including the land.

One argument often advanced for reducing the land cost component is "densification."  Again, there is no explanation of how this really works.  If it did work as advertised, we could not draw the following graph.

It plots land prices for each of 20 representative lots in North Saanich against the lot sizes.  The lots range from .074 to 2.5 acres.  The smallest parcels are at Canora Mews, the others are nearby.  The land values are from the 2021 BC Assessment. 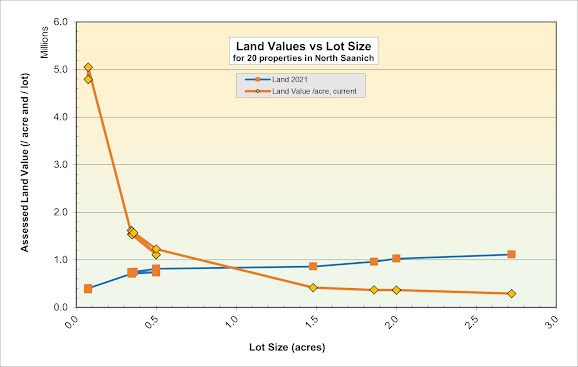 Also plotted is the land value per acre which allows us to compare "apples with apples" for properties of widely varying sizes.  The graph is quite revealing:

So, it would seem that carving larger properties up into smaller ones does very little to reduce the land cost of the dwelling package.
With this in mind, make sure you ask those candidates who are flogging the "build more" and "build denser" solutions to the housing problem, how they really plan to achieve true affordability.
at Sunday, October 02, 2022 No comments:
Email ThisBlogThis!Share to TwitterShare to FacebookShare to Pinterest
Labels: Affordability, Elections, Growth, Housing, OCP, Opinion, Policy
Newer Posts Older Posts Home
Subscribe to: Posts (Atom)

Categorized Blog Archives are at the bottom of the page

Please Use This Form To Send Us Your Comments